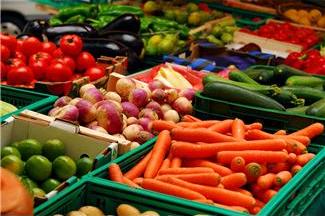 The following is a listing of 2013 KC metro area farmers' markets, listed in alphabetical order by state.  For any additions or amendments to the info listed, please contact us.

One Nineteen Green Market
2013 market dates not yet published/confirmed.
One Nineteen is an outdoor shopping center at the intersection of 119th and Roe in Leawood, Kansas

Wednesdays
Hours:  7:30 a.m. - till sold out.  Various special events throughout the season.

On Marty between 79th and 80th Street
Overland Park, KS

The BADSEED Market is dedicated to providing the “conscious consumer” with nutritious and delicious foods grown sustainably (and with LOVE) in the immediate community. The Friday Night Farmers’ Market offers a plethora of local-organic delights including colorful fruits and veggies, baked goods, gourmet mushrooms, goat cheese, eggs and free-range meats.

Choose from a variety of organic & locally grown produce, flowers & herbs, salsa & jams, natural meats and much more! Burgers will be cooked on our patio starting at 5. Live music, cooking demos & food samplings keep it afun-filled atmosphere every week! And every 3rd Thursday will bring a special event night for the family! Come join us!

Corner of 2nd and Douglas

*2013 market dates not yet published/confirmed*

Crossroads of 39th and Genessee Street

*2013 market dates not yet published/confirmed*

If YOU have a Farmers Market listing to share with us, click here to let us know!